Here are some pictures from his first week.

Love love LOVE this one 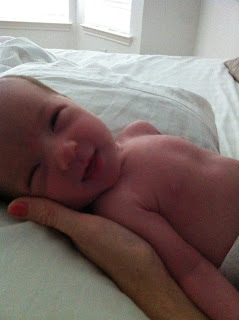 Snuggled up with mommy 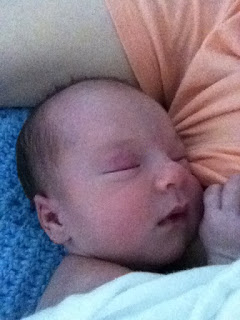 Meeting his big sister for the first time 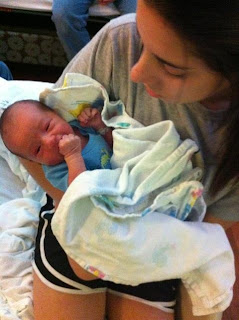 Meeting one of his big brothers 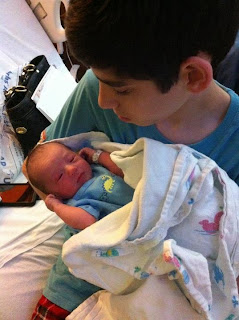 Meeting his other big brother notice their same faces! HA! 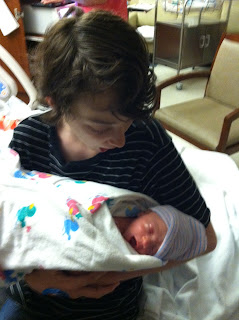 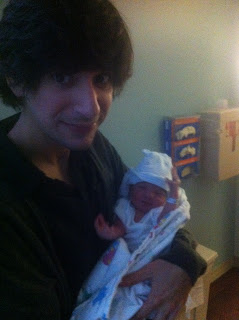 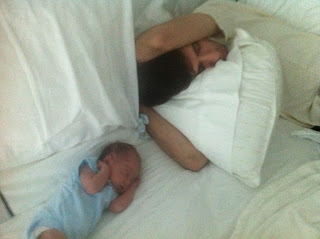 Cuddling in the blanket his GG made him 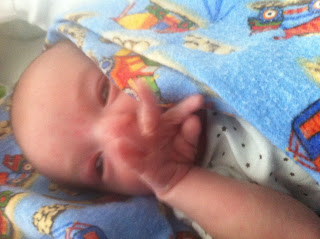 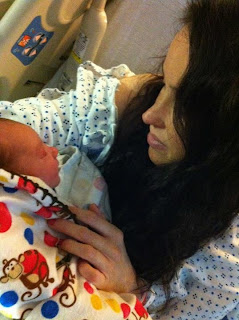 posted with love from JessMarie at 1:48 PM 2 comments:

Sorry this took awhile to get out, hopefully I can post pictures too!

I am going to tell Noah's birth story minus all the gross details.  Kinda.  I will be pretty tasteful, you can use your imagination though.

Two days before Noah was born (Saturday) Scott had his gallbladder removed.  Yep, he had major surgery.  The whole time he was in the hospital he repeatedly told the hospital staff he needed to get out as fast as he could because his baby was going to be born at any time.  So the surgeon who operated on him let him leave Sunday morning.  He came home and slept on and off most of Sunday day and evening.

My parents came up from Harker Heights for the weekend so that I would not be alone while Scott was in the hospital - just in case I did go into labor.  I asked them to stay an extra night because I had an appointment Monday morning and we would know more about when Noah would be coming or at least have a plan to induce or whatever.  They stayed. Sunday at dinner I had one legit contraction and that was it. I went to bed like normal.

I woke up at 10:30 because I had another contraction.  Not a bad one just one enough to wake me from my sleep.  Nothing followed. I tried to go back to sleep again.  30 mins later, another one.  This pattern continued until 1am when I had 2 contractions within 30 mins.  Again these contractions were not too painful.  My hip bones hurt which I assumed was "back labor" and didn't think much more of it.  I woke Scott up at 1:30am and asked him what exactly our plan was and he asked me if I was in labor and I told him I wasn't sure but I didn't think so, because I was not in that much pain.  He decided to get dressed anyway.  As soon as he went into the closet to get his clothes on, my water broke.  And when I say broke I mean exploded. Like a water balloon.  It was terrible. Terrible.  I immediately ran into the bathroom and locked myself in it.  Why?  I felt gross. I wanted to shower and do other things first.  I am really weird about things being clean. I believe a happy home smells like bleach.  I had a plan (fantasy) about what was going to happen and that plan (fantasy) involved me doing my hair and makeup and being showered when I left for the hospital. At this time Scott starts banging on the door telling me to come out so we could go to the hospital to which I kept saying no.  He went and woke my mom, and I told her the same thing, I wasn't coming out.  Scott, of course, got frustrated with me and said if you don't come out I'm breaking down the door. So, I reluctantly decided to come out and he led me to the car. Shoeless. I hysterically pointed out the fact that I did not have shoes on and he told me I would be fine.

We live ten maybe fifteen minutes from the hospital and the whole ride there I am holding myself up because I DO NOT want to sit in the drama that was going on all over the seat. Believe me it was an awful lot of drama!  It was gross. Meanwhile I am screaming bloody murder (looking back, I totally sounded like Bella from Twilight when she was screaming in her sleep, about something, I know totally lame.)  I was not screaming because I was in pain, not a bit,  but because I felt gross and dirty (which I was) and at one point I started to think about asking Scott to turn around so I could shower.  I don't remember now if I did or not.

My mom tried to console me by telling me that it was sprinkling out side because earlier that week I was texting my grandmother and she made a joke about Noah being in his "ark" and not coming out until after it rains. I did not want to hear about the rain! Nope! After that I asked Scott to run all the red lights.

When we were less than thirty seconds away from the hospital I tell Scott and my mom I think he's crowning to which my mom replies, that's okay we are almost there.  I said no no you don't understand he is coming NOW.  Sure enough we pull into the hospital parking lot and I feel the need to push so I did.  Scott pulled up in front of the ER entrance and yelled that he needed help and as he came to the passenger side to help me out of the car I'm like he is here and I start to pull my shorts down and Scott grabs them and yanks them off and sure enough Noah's little head is out and Scott reaches down and pulls him out. The ER Dr comes running out and instructs him to unwrap his cord from his neck and tells us not to worry its not life threatening.  Noah took his first breaths and did not cry at all.  I am still shocked he didn't cry he just looked around. Then two male nurses came out and picked me up and put me on a stretcher and took me to labor and delivery.

While in the labor and delivery room with the Dr I said not one word, I seriously just laid in the bed thinking "oh my gosh this just happened"  I did not expect things to go that way at all.  I was shocked.  I told everyone my whole pregnancy I wanted to try to have a natural birth just to see if I could do it and sure enough, I did it!

Two random fun facts:  I was wearing the shirt I wore when Scott asked me to marry him when Noah was born.
And the first person my mom talked to after Noah was born was my Aunt Kerry, the same person she talked to first after I was born. Cute.

posted with love from JessMarie at 1:28 PM No comments: